Fifty years ago, my late friend Doris Wishman's debut feature, Hideout in the Sun, had its galactic debut at the Paris Theater on Miami Beach. 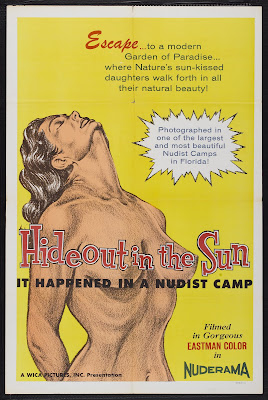 Most filmographies attribute a 1960 release date to her plucky crime 'n' boobs opus, but when I lived in South Beach and was running the Sick Sinema/Giallo Fever/Hiroshima Rising film series for the now-defunct Alliance Film and Video Co-Op, I did a lot of time in the stacks of the University of Miami library, printing period Miami Herald cinema ads from microfiche. (I made hundreds of copies, many of which were repurposed for Sick Sinema fliers.) Lo and behold, on December 31, 1959, Hideout's debut was blazoned, nay, trumpeted, on the Herald's movie pages. It was a monster hit for Doris, playing for months in the local art houses and drive-ins.

Years later (1991, to be precise), I met Doris while she was at work in the Pink Pussycat erotic boutique in Coconut Grove, and literally took her home with me. She hadn't made a film since 1983's A Night to Dismember, and although I was unable to lend her the $50,000 she'd asked of me at the time of our meeting, I did offer her a directorial assignment, which she accepted - she shot two hours of video (with the assistance of Syd Garon and Rodney Ascher) for the proto-TLASILA EP (credited at the time to Peach of Immortality) Spatters of a Royal Sperm.

There was no real TLASILA group back in 1991, just me, with a rotating band of co-conspirators (Fred Ware III, Tigra DeRougement, and Oscar Perez), and we used the POI moniker in anticipation of the release of Spatters on the Noiseville imprint. As you may know, Noiseville collapsed, and Doris left the project, slightly confused by the change from film to video production and the general chaotic nature of the lives of her young charges.

You are missed, you sweet, crazy lady...