And Another New Album from KSV...

Heading out soon for a birthday party, but before the first shots are poured, a heads-up on the new KSV compilation, Was ihr verpasst habt...

(Or, for those of you not yet conversant in German, What You Missed...)

It's a two-disc set, subtitled "A Karl Schmidt Verlag Totem Collision." Using a randomizing algorithm, we re-ordered the chronology of the first 103 KSV releases, then mixed one-to-two-minute segments together to create the pair of compositions contained within. 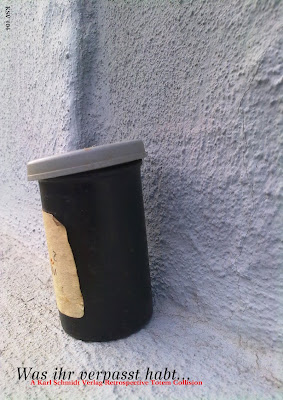 If you want a copy, you can reserve one now, or just want until tomorrow, when they'll go on sale. Limited edition of 15, with a special price of only €12 in the EU (postpaid), and €15 elsewhere (also postpaid).

OK, off to celebrate a friend's imminent drunken decline.