Bungle in the... No, I Refuse to Evoke Ian Anderson. Or Eric Andersen. Or, Arn Anderson. (Shit! Too Late...)

A printer's error may derail the September release of Reconquer Sleep or Disappear, the duo album Kevin Drumm and I have been meekly pimping for months. Manu, the very patient supremo of Lyon's Savage Land Records, broke the news to us today: each sleeve seems to have been purposely leeched of at least one primary color; they're a ghastly mess. For an ornate, true-color, triple gatefold package, not the best fleck of news phlegm to wipe from one's morning. (Yes, of course I find this mild catastrophe to be of perverse aesthetic interest, but the original design was really rather lovely, and it's the iteration KD and I prefer.) 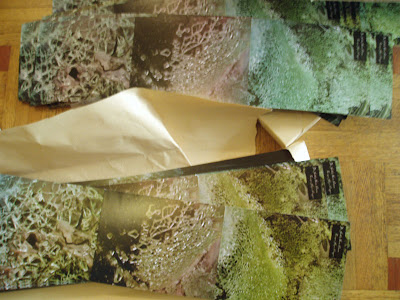 (Not what we'd had in mind, despite the tonal amputations. Click for a larger version of the image.)

No way that Savage Land'll have to pay for the fucked-up sleeves, but the mistake puts the album's deadline in serious jeopardy. Forget September. Perhaps early 2011, in time for our Scandinavian trek?

Mind, the actual compact discs are already safely stored at Savage Land's atom-proof command bunker in Lyon, and it's not the end of stew beef or even middlebrow theatre criticism as we know it. A mere annoyance in the continuing series. I'm sure each of you can relate.

Still sick. Missed work today - first time that's happened since I moved to Deutschland. It felt strange to leave my students in peace for a change...