I think we've hit the wall. The last ten days have been genuinely manic for the CP and I - we've each promoted concerts (she, Hamburb's Kristof Schreuf, on the 18th at the Oberdeck, and yours truly, Bern natives RM74 and Herpes Ö Deluxe on the 19th at Sturmglocke), traveled to Berlin to attend the vernissage for Stefan Roigk's Crystal Castle exhibition at Ausland on the 20th, and then zoomed across Niedersachsen to perform last night at Bremen's Weserburg Museum of Modern Art with Pit Noack as Three Resurrected Drunkards. Not to mention working our usual day jobs, consuming the odd alcoholic beverage, staying out late in Berlin, even hitting the (re-)opening of the long-shuttered, now apparently resuscitated Space Age '79 disco in Hannover's Liste neighborhood throughout the morning of the 19th. My friends, we're wiped out. We're missing a party (sorry, Mo) and Michael Brun's Italo set at Hamburger Botschaft tomorrow night, and we're staying home on Saturday evening, most likely to drink wine while listening to country and schlager instead of taking in Sturmglocke's doubtless fun-slathered Freak Beat Party. Sometimes you just have to chill the fuck out.

After our train pulled into the Hannover Hauptbahnhof from Bremen early this morning I had to immediately board the S-Bahn to my first class of the day; while I was at work, Claudia read of Ari Up's passing, and when I arrived back home she conveyed the sad news to me. Such a bloody shame. I was a massive, massive Slits fan back in their heyday, and always had the greatest respect for their extraordinary art, reviled and ridiculed as it was in the mid-70s by noisome, clueless musos. Cut is beyond classic, and Ari was a fucking great singer. 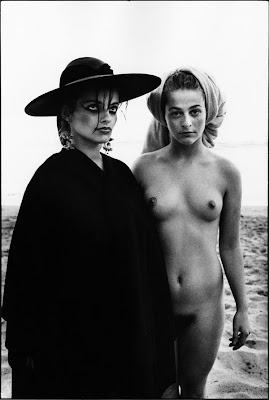 Re Three Resurrected Drunkards at Weserburg Museum: below, please find a clutch of photos. Stills are by me, and the framegrabs are taken from Claudia Franke's video. The flier was designed by the staff of the museum's REM (Reihe Elektronischer Musik) Konzert series...

That's all for now.