New Links #5: An Interview with the Mitchell Brothers

The fourth TLASILA album (at least from a chronological perspective), An Interview with the Mitchell Brothers was created in a single day (August 11, 1995) in response to a dare issued by Sir Ned Hayden of the august Audible Hiss imprint. Using Kenneth Turan's invaluable 1980 reference work Sinema: American Pornographic Films and the People Who Make Them as my primary template, I dashed out ten lyrics and edited the cut-up backdrops over which Ben and Rat would shade and abrade. We hit record, tracked the lot, and then the boys cleared out to prowl the night. Meanwhile, I mixed until morning. There was no mastering stage - we went straight from studio to CD-R (which took about two hours to burn in those hoary old days). Ned had asked us to deliver a 45-minute album, so we had to leave off "Desires for Men" (the songs on the album took their names from titles of films directed by the ill-fated Artie and Jim Mitchell); "Desires" eventually appeared on the Les Tricoteuses album (which was completed in 1996 but remained unissued until 2008, when Savage Land stepped in to suture the breach to temporality.

Above, the original sleeve, created by the great Syd Garon and rejected by Caroline/EMI's lawyers. We ultimately were forced to choose a less scabrous image. (See below.) 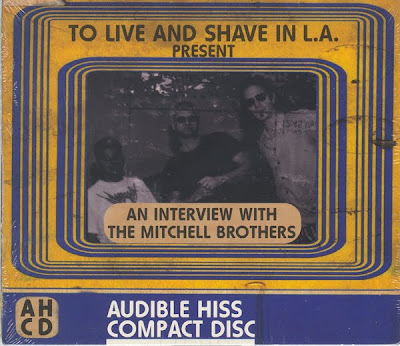 Engineered at The Studio, Miami, on August 11, 1995 by Rat Bastard (bass parts only) and Tom Smith (the rest).

Mixed and Produced by Tom Smith.