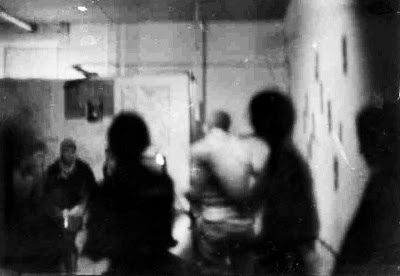 (Photograph by Linda Hopper, taken during the September 21st performance. TS is in the background, crouching over the drum pad. David Gamble is shirtless, standing before his drum kit. Mike Green is in foreground silhouette, with his left arm intersecting with Dave's left shoulder. Sandi Phipps and Carol Levy were out of frame.)

The backing track was edited cassette-to-cassette using the instrumental version of the then-recent "Disco Dream" 12" by Sugarhill Records group Mean Machine. We're mostly metronomic behind the throb and diffused pulse, but I always preferred it when we became skewed and wobbly. I loved fellow Athenian groups Pylon and Limbo District, but they were already doing "tight" and "evocative." We just wanted to scramble brains and make the audience wet their pants. Sometimes we succeeded. The DNA connecting Boat Of to Peach of Immortality to To Live and Shave in L.A. to Rope Cosmetology and beyond is obvious, self-evident. Being in Boat Of was a terrific education in confronting (and confounding) the future.

Where you there? When we crucified? Music? Listen here.