Prune of Irregularity vs. Ref Upon Uglier Rarity...

Promo report: Peach of Immortality nine-disc Surrealismus: Paris Prag Rockville compilation (KSV 424). This flat-panel (as opposed to box) set will offer a glimpse into POI's genuinely manic recording regimen, excerpting segments from nineteen distinct, planned, argued over, recorded (usually under the influence of acid, or speed, or something), and, as goes without saying, hopelessly uncommercial and ultimately unissued albums. (Hopeless by mid-80s standards, that is, considering the DC locale and its predominant, hippie-hardcore norms. If we'd been in Tokyo, Berlin, the East Village, or, dunno, Milwaukee, maybe a different story.) I've just finished mixing one of the "studio" tracks issued as part of Jehovah My Black Ass - R.E.M. Is Air Supply!, and our expedient, low-tech approach to recording (a weird cassette system where we'd track one side, then apply silver adhesive to the flip, reverse the tape, and track backwards, which would be reproduced as forwards) was not perhaps to our benefit. The REM / Air Supply composition in question, "31 Jan 86," clumped Mark Shellhaas' caustic digital frippery atop my live tape manipulations (of a Corrosion of Conformity ditty), cluttering the frequency traffic and making it difficult to tell what the fuck was going on. (Which, if you were tripping your guts out, as we were, sounded AMAZING.) The flip side is far more coherent, with Lowell Ginsberg's bass gawping below Jared Louche's excellent tabletop guitar lashings. I stripped the two halves, checked and matched the intro points using a copy of the 1986 test pressing for comparison, normalized the levels, adjusted the EQ to abrade some of the mid-range clatter from the tape/digital FX track, floated the A side strip with a smidgen of verb to lift it out of the miasma, and panned the channels just so to achieve a bit more separation. It sounds much, much better than before. That's more or less what it takes to restore some of this material; other tracks are self-contained and need only a wee dollop of mousse. It should be ready by the end of the week! 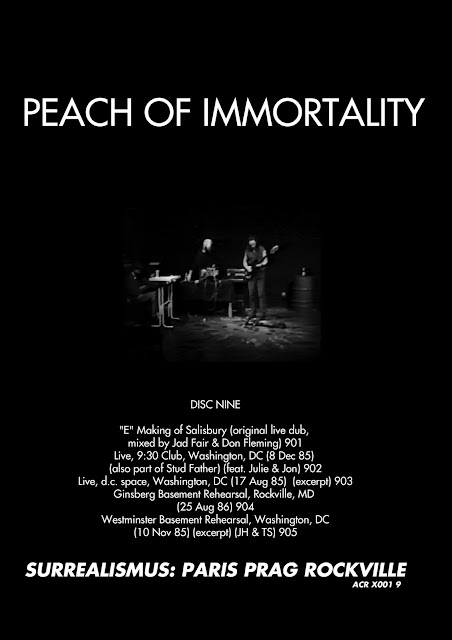 Apropos of: read this post from the quiescent but no less illuminating WFMU Blog.