Today we welcome Priya Ray and Robert Price to the blog:

What can one write about a man who led a life so indisputably vital? His energy left most people utterly depleted.

I met Michael sometime in the mid-to-late 90s. I was living in Miami, and he was touring with Behead the Prophet. The group played that night, and later crashed at my house. I was intrigued by Michael from the moment I met him. Beside the fact that he played violin in a metal/punk band and I played violin in a psychedelic/punk band I was in awe of how a 62-year-old man had the same energy and tenacity of a teenager. We talked about free music, our views on learned improvisers, art, and pretty much everything else we could think of talking about, but for some reason it never occurred to us to play music. A year later my band Kreamy 'Lectric Santa went on tour and we ended up in Bellingham Washington, where Michael lived. We were having a bad tour experience so Michael invited us to house to make some noise. Robert, Paul and I ended up going to his house, which was dreamlike. The living room was dedicated to playing and recording music. He had everything from a drum set to the the guts of a piano in there. I've played free music before I had met Michael, but that was the first time I ever played with a person and felt that there was something divine about it. It was like a great force had entered the room and there was nothing anyone could do about it except keep playing. Michael and I played a few more times together and everytime we would get together the crazy, indescribable energy would take over. We would always talk about what had just happened with excited disbelief. I wished that this was something that we could have done on a regular basis, but geography and life got in the way.

This morning I received the phone call informing me of Michael's passing. I was not really shocked, but saddened by the realization that the moments of the inspiring spirit and pure creativity that I, his fans, friends and family shared with Michael are now to be filed away to memory. Then again, when I think of Michael I know he would encourage us ALL to go out create our own new unexplained moments of greatness.

It seems absurd that such an intense, seemingly superhuman being would leave this world so quietly. He lived life and inspired many to explore free music without pretension or attitude. Giving up the guitar for the violin, he was a self-taught master. I feel deeply saddened having recently spoken to him and feeling his illness wasn't as bad as it had been in recent years. He sounded like his old self, filled with life and ideas. He even had some writing projects in the works. My heart goes out to his family and all who experienced the wonderment of meeting and playing with him.

TLASILA - A Flock of Seagulls vs. Miscarriage 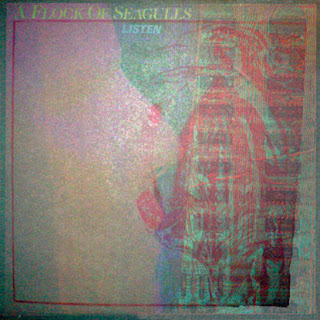 AFOS Part I: The Complex Illusion of Age...

TLASILA - A Flock of Seagulls vs. The Haunting

A baby's cry from offstage,