The Holo Sounds 2 festival kicks off this Thursday at the Artur Boskamp Stiftung in Hohenlockstedt. Day 1 will be devoted to workshops and symposia, Days Zwei e Tres to music, and Day 4.0001, presumably, to hangover research. I'll be straight keelhaulin on the 29th as T/SMS. Looking forward to peeping my pervs 1115 as well. This will be one hectic blank slate! 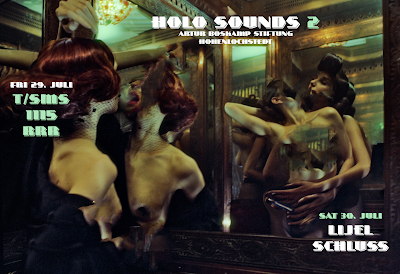 I've been working since January to restore the lost Karl Schmidt Verlag archive, and have been tremendously aided in this endeavor by primo aesthetes and avid collectors Bruno Bissonnette and Michael Bruns. Bruno's done most of the heavy lifting, contributing rips of nearly 100 previously lost KSV titles. Michael offered a box of 75 discs (and both USB releases), but I already had about 50 of them in my own stash. His efforts were much appreciated, however, as he owned hard-to-find alternate editions and DVD bonus materials that were wiped when the old master hard drive died in March 2015. Robert West (aka Horseshoe Bob, from KSV 060!) has also come forward with an offer of assistance, and we'll be chatting soon.

As of today, 80% of the archive has been restored.

The label has been revived - we'll have new releases next week - and all the albums we're able to access from the 2009-2015 run will be uploaded for free to KSV Bandcamp.

Sixty-nine albums are already there. Grab what you need. This weekend we added KSV 063 Screwdriver (sic) - Skewed Plural, KSV 064 Minimal Man / Peach of Immortality - Hardart Gallery, Washington, DC, November 16, 1984, and a new release, KSV 403 Hairian Nation - Double-Wide Klonvocation, my remix of the audio feed from all four days of the Republican National Shitshow.