Below, screens from Claudia Franke's HD vid of Three Resurrected Drunkards' May 15th performance at the 7. Mainzer Kunstwerg Festival, which was held at the Walpodenakademie in the once-razed ('45), now church-bell-crazed city of Mainz. Left, yours faithfully, employing voice and cheat sheet. Right, Pit Noack, on prepared cassettes/cass deck array. 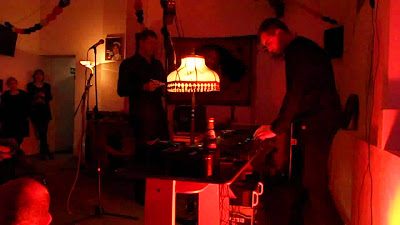 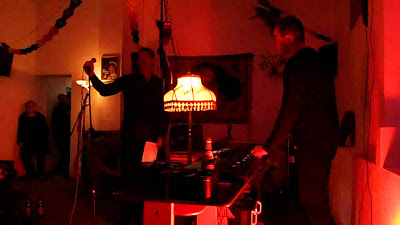 Waiting for my final student of the day to appear. They've all been either late or talkative and depressed today, and in my righteous vengeance I've assigned each tardy exec four pages of word-order exercises. The students all seem to get hung up on "John walked every morning to work," which one is must admit is a very swell thing for John to do but remains irrevocably fucked from a grammatical POV.

Anyhow, just checking in - it was wonderful to abjure Wi-Fi for four days, but luxuries eventually become burdens, and the crushing weight of creative ambition supersedes chilling the fuck out in a well-appointed flat in the über-historic capital of Rheinland-Pfalz surrounded by Fluxus histories and Airway bootlegs.

Re the Mainz fest: a few pix have already turned up, mostly scattered about Facebook. I'll post a gallery for you here later in the evening.

Re KSV update: full details and the aforementioned audio teaser coming this eve as well.

Still waiting on A. Dillo's forward (he's promised it this evening - fanx A!), but as soon as he gets it to me, I can confer with my printer, confirm the many reservations (cheers!), and form the pricing syllables for Unpunished.