Live performances are fairly easy to transcribe and prepare for release. These new studio recordings, however, were extraordinarily complex, time-consuming affairs. (Scads of hours staring at the monitor - my eyes are fucking gone!)

Not griping, mind - I hope you'll find the results to have been worth the effort. And, as always, Karl and I appreciate your kind support and illuminating critiques.

If you want them, you know what to do.

Horseshoe Bob (aka Robert West) is a resident of London and a long-time friend of Karl Schmidt Verlag. He began sending us wheal haiku hula wails in early 2009. By the end of the year, we'd asked him to assemble an album for release, as his compositions bestrew rot on hulled shucks of curlew Halal. Herr Bob pulled out all the stalks and rivulets for his KSV debut, and you owe him your coin in recompense...

Post-production mastering by TS for KSV.

Academia Riding Rust return for their sophomore radium eradication, and the bastard nieces of abstinence triads couldn't be more arsed. This braised cycle, ARR slip lariats round the glutenous extremities of the 2010 Juno and NME kudocasts. Radiance? See worms.

Sick fucking second KSV expulsion from the Bulgarian diva of disharmony. If you were among the lucky few who enjoyed diminished correlated synaptic activity after listening to Ms. Fregatte's 2009 debut Coldplay Nancarrow Burzum Hines, you're in for a seizure of Michaelsian proportions.

Composed, recorded, mixed, and produced January-April 2010 by Katja Fregatte at the Mathematics and Informatics Laboratory of the University of Plovdiv, Plovdiv, Bulgaria.

FEE's master was first edited for concision (applause and other extraneous sounds were removed), then subdivided into 30- and 60-second segments which were arrayed according to the results of two randomizing algorithms (one self-devised, the other determined via atmospheric noise filter).

The resulting composition neatly subverts our expectations of narrative, upending shared assumptions of the classical canon while positing fervent Yeti tintypes atop an impious synaptic veneer.

Wohlklang has been a flowering green wasp of late. On the scornful night of March 17, Spain's Pato and the French-American duo Crystal Plumage busted up the speaker shop but good. Familiar spirits were compelled to drop their pitchforks for gnawing imperfections...

Edited, mixed and mastered by TS for KSV.

KSV 077 Brenda Harris: The Woman on the Bed

Inspired by and partially adapted from Howard Alk's exemplary 1971 documentary The Murder of Fred Hampton, and begun by TS the week after the death of his father (the first backdrop layer was recorded in the garden of his parents' South Georgia home in January), Brenda Harris: The Woman on the Bed shifts the focus from the slain Chicago community leader profiled in Alk's film (and away from the still-relevant, but nonetheless dated declamatory cant of the period) to those directly affected by the death of someone influential, dear, and near.

Composed, recorded, edited, mixed and produced January-April 2010 by TS in Adel, Georgia and Hannover, Deutschland. Audio elements from Howard Alk's The Murder of Fred Hampton are interpolated throughout the composition. 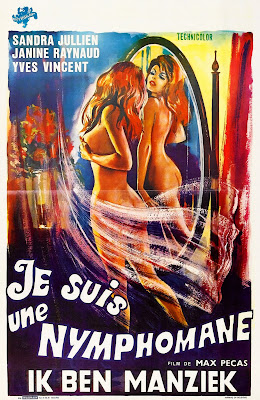 (Above, the poster for the Dutch-language variant, Ik ben Manziek.)

Tom Smith's Die Frau betreffend is the first in a series of large-scale solo and multimedia vocal works that will apply pre methodologies to explore pathogenic confluences of isolation and intimacy, mediation and interconnectivity, and gestural transmissability - the search for aesthetic clarity amidst the clutter of received notions, fatigued norms, and stratified stigmata.

Die Frau betreffend is based on an early iteration of the score composed for Tom's proposed 2010 European solo tour, and employs vocals extracted from To Live and Shave in L.A.'s 2007 studio recording of The Cortège.

The narration used in this version was taken from Die Frau, an encyclopedia for women that was omnipresent in the former DDR (East Germany). A guide to socialist living one year, a moldering kitsch totem the next...