Oh yeah - here's the poster from last weekend's fest. Suitable for lighting that long-needed fire under your ass! 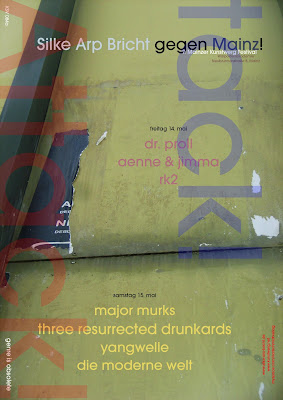 I've just returned from Mainz where Three Resurrected Drunkards performed with a slew of Silke Arp Bricht alumni at the 7. Mainzer Kunstzwerg Festival. The CP and I had access to the Internet, but we opted instead for a 96-hour detox. More on the fest later.

Re the recently announced KSV flotilla: I'll relaunch the lot tomorrow. Tried to fit too much into too little time last week. Apologies for keeping you hanging!