I watched The Monkees, both during its original run and later, when and wherever it was rebroadcast. I especially enjoyed their 1967 release Headquarters, and as multiple-disc bootlegs of their albums began to appear in the early 2000s, I slurped them down and slogged through the usual assortment of false starts and arcane failures. Their brilliant, ill-fated 1968 feature film Head, directed by the oft-great Bob Rafelson and written, as has been noted here before, by a still-struggling Jack Nicholson, should be on everyone's queue/mantle/USB stick. And their rather too obvious but nonetheless outré 1969 NBC special 33⅓ Revolutions Per Monkee (which featured a crazed opening turn by Julie Driscoll and Brian Auger) is worth getting wasted to again and again.

Most of you know what Davy looked like, even if you were born decades after the fact. No need to post screencaps here. The Monkees were what they were, but from 1967-1969 they aggressively charted a gleeful course of self-immolation. For that, all artists owe Jones and his colleagues an immense debt of gratitude...

Hallo Droogz,
We have over 50 new releases simmering on the back burner. Tonight, we'll offer the first thirteen of them for sale. Crowding and shoving are recomnended!
Cheers,
KS/TS
at February 29, 2012 No comments:

To Live and Shave in L.A. - Vixens of the Mortal Ring 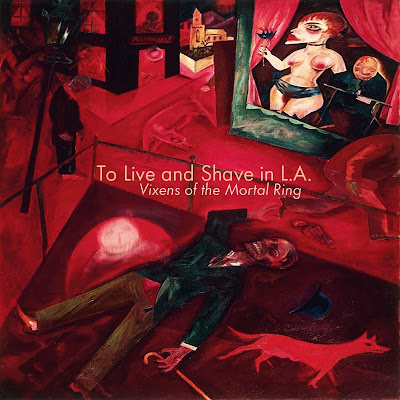 Two editions, with the first, in an edition of 50 issued by Spite Recordings, and the second, in an edition of 15, via my occasional Western Blot imprint. Spite, bless 'em, used pretty cheap photocopying, and the text on the sleeve and accompanying inserts was thus near-impossible to read. For the second edition, I jettisoned the found-photo motif and instead employed G'g G'z' Selbstmord. (The music, much to the audience's probable chagrin, was left unchanged, save for the many differences 'twixt versions.) 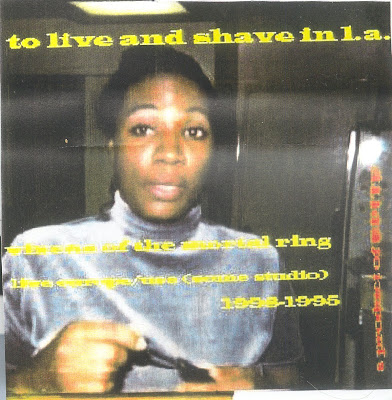 05 From Withers to Belly Line (version)

07 I What Dampness Did

08 Premonitory for the Premonition

13 When My Rifle Went Sour with Preposterous Headdress


The 2005 version features a newly edited master and  a contiguous mix. Selections 8-12 were left off the second iteration due to time constraints. A great deal of dead air was excised from the original master.

New Links: Where a Horse Has Been Standing and Where You Belong...

To Live and Shave in L.A. - Where a Horse Has Been Standing and Where You Belong 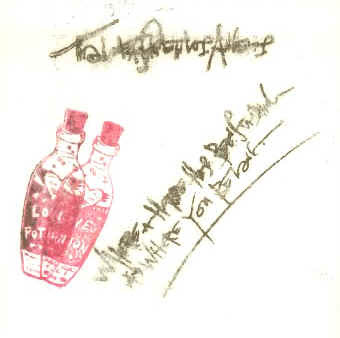 For four years, The Wigmaker seemed an inscrutable rebus. I had only the vaguest notions of where I was going with the album.

Marc Weitz and I spoke long and often about its direction, its potential impact, pre, etc. After one such conversation in 1998, a solution - obvious, imperious, inevitable - just popped into my head. Soon afterwards, a proof of that assertion appeared.

The Wigmaker required an additional 16 months of swamp strip circling to safely land, but Where a Horse revealed its final approach...

From the enclosed insert:

"This is an exercise in problem solving. The twelve most troublesome tracks from the still-in-progress 2xCD The Wigmaker in Eighteenth-Century Williamsburg have herein been jostled ("Skincare Movement!" is but protracted glamour fit)."

I would immodestly suggest that the following were fitted with the greatest fucking titles of all bloody time. Thank me very much:

Recorded at The Studio, Miami, 1995-1996 by Rat (bass engineering only) and Tom (everything else); re-edited, remixed and produced by TS in 1998 at Microgroove, Decatur (Atlanta), GA.

The original, a hand-stamped white cardstock sleeve in an edition of 300.

Its rear sleeve featuring a panel from Grant Gaston's "Captain Crud in a Duel to the Death with Toothman," originally published in 1966 by the University of California at Berkeley's Pelican newspaper, and reprinted in 1967 by Fawcett Gold Medal Books for their Wonder Wart-Hog, Captain Crud and Other Super Stuff paperback. I bought the book that same year for 50 cents (its cover price) and I still happily possess it to this day.

The second iteration of the disc (launched once the original card stock package had sold out) found it stuffed into a hand-stamped envelope, crammed into a 7" single bag, and enclosed by an 11X14 poster (detourned from a Nike advert). Eight copies contained bonus inserts: the 1995 Audible Hiss EP New Songs with Drug and Pornographic Themes, a mini-one sheet from the Tora Tora Tora! fest, and the original version's liner notes, albeit scratched through and replaced with handwritten Italian text.

Its third iteration (an edition of 100) found Horse secluded in a black cardstock stable. A stud farm (or glue factory) beckoned...