Between January and April of 1994 I recorded a little under 17 hours of interrogations of my late friend and frequent sparring partner, the inimitable Doris Wishman. The tapes were made for a Psychotronic Magazine feature Michael Weldon had asked me to write, but their sound quality was so grievously compromised by the roar of my Miami Beach apartment's air conditioner that they were impossible (at least in those pre-DAW days) to redact. I transferred them a few years ago, and managed to cut through the layers of murk. I still have to pinch myself - Doris and I watched a huge chunk of her deep-fried oeuvre together. (And she directed the first TLASILA video!) Not terribly shabby. Pluck out your eyes and fix 'em on March 29th - she was on fire! We watched six of her films, then she regaled me for another half hour with Chesty Morgan stories. That would NEVER happen with Michael fucking Bay. You'll have to agree - DW was just too awesome for this dimension... 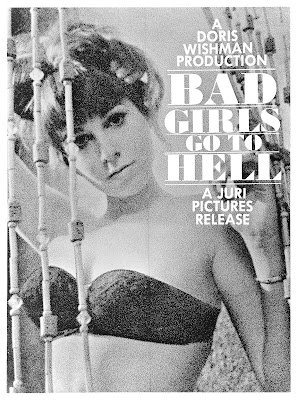 Excerpts from two of the tapes have been on our Soundcloud page for quite a while. Click here to listen to Doris and I discuss My Brother's Wife. Click here to eavesdrop on our chat about Double Agent 73.