Looking through my reactivated Facebook profile for hi-res images of Boat Of, the group Mike Green and I founded in Athens, GA. We ruled from (J.) Conradian redoubts from '79-'83, and I've once again become immersed in our simultaneously cosmopolitan, sectarian world. As I finalize the master for the forthcoming Forbidden Mourning Practice compilation, I become ever more aware of the debt I owe to Mike, Carol Levy, Sandi Phipps, David Gamble, Kim Karelson, Jim Walker, Leslie Michel, Davey Stevenson, Dominique Amet, Arthur Davis, Todd Ploharski, Vic Varney...

So far, I've only uncovered low-resolution images from the FB timeline. Bummer. Wanna see a few of them? 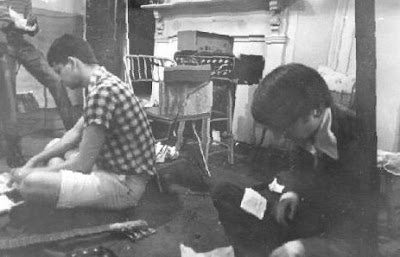 Early 1981, rehearsing at the Cobb Institute with Thomas Abdu (sadly out of frame), yours truly in the checks, and Mike Green. 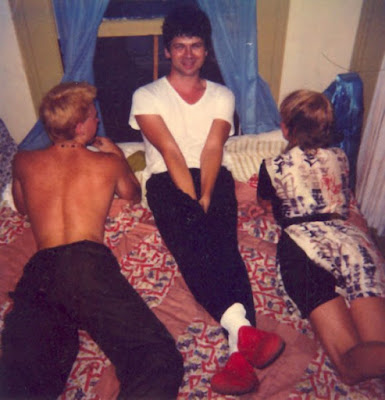 Late '82, atop Vanessa Briscoe's bed. Davey Stevenson is well fit on the left, I've got some sort of perm going to match my red shoes in the middle (I wish I'd been a bit less antithetical in an obvious regard), and the explosively wry Dominique Amet. 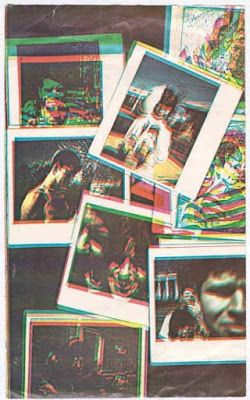 A Polaroid collage from the early autumn of 1981, from locations around Athens. David Gamble, Sandra-Lee Phipps, Carol Levy, and myself. 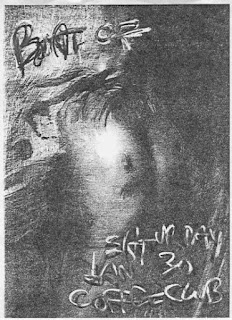 A flyer for what turned out to be an extraordinarily raucous Coffee Club performance. Before our CC gig we invaded the stage during Love Tractor's set at the 40 Watt and assayed a convulsive half-hour improvisation. Officers from Athens-Clarke County Animal Control arrived much too late to disrupt the assault. 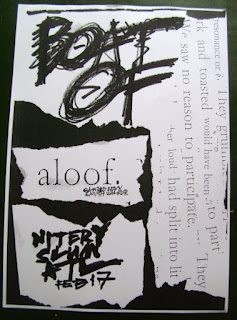 February 1983, Atlanta. Neither Carol Levy nor Jim Walker were able to make the gig, so David Gamble invited Birmingham pals Jim Bob & the Leisure Suits (half of whom later morphed into Primitons) to tackle my beautiful music loops. It would prove to be Boat Of's final gig in Georgia. 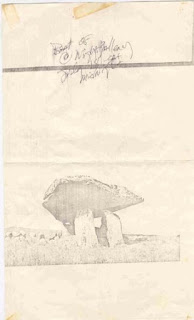 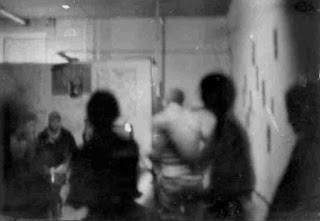 Boat Of live at the Night Gallery, July 19. 1981. Sandi Phipps and I are at the far left;  David Gamble is shirtless, and Mike Green's shadow forms a V for viaticum. Carol Levy was out of frame. Or, standing next to Mike without her guitar, which can't possibly be correct. (Photo by Linda Hopper.)

Kevin Drumm and I picked up our conversation - one that surges, drifts off, abates, and swells with elliptic certainty every few months - in the orthopedic ward of a hospital. He was in Chicago, and I was recovering from leg surgery (broken fibula) in Hannover. We were shooting the breeze, discussing Blue Öyster Cult, better names for kids (we settled on Four-Hour Binaural YouTube), Windy City rents, our 2011 tour (which we both enjoyed tremendously), and muzak-making. 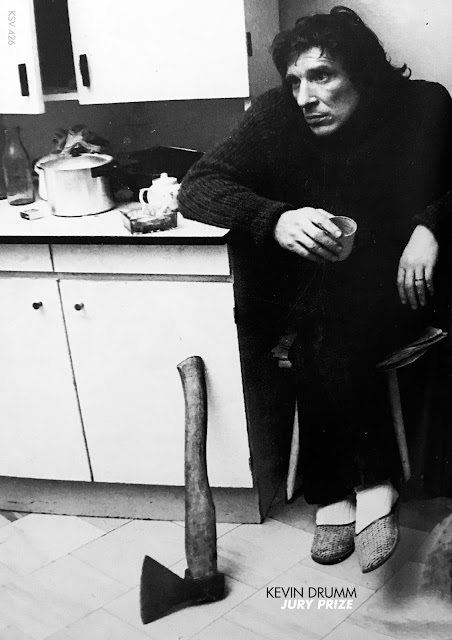 Pre-wire your jaws, as they're bound to plummet.