Available now on Karl Schmidt Verlag and Adult Contemporary Recordings: Cup of Indignation by Boat Of, a 60-minute generative chronology (i.e., an assemblage of stochastically distributed, non-static loops) covering a wide swath of the group's recorded output from 1979 to 1984. Yowza! With the Boat Of compilation cassette Forbidden Mourning Practice forthcoming on Hitomi Arimoto's unhinged 777 Was 666 imprint, it's a very good time to be against every fucking thing that exists all over again. 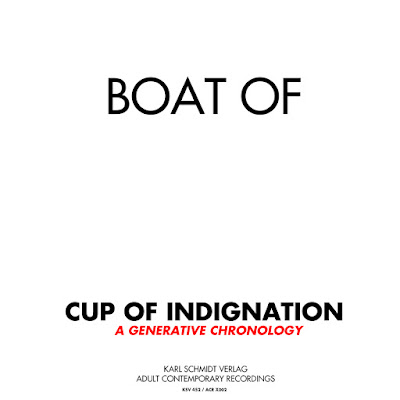 No physical edition at present. My broken leg precludes hauling parcels into the post for at least another month. Lossless digital, €7.99 at KSV Bandcamp.

Boat Of is quite the complicated beast. Our original idea was to change the name of the group with each live performance and / or shift in direction, but of course the conceit quickly revealed its limitations as soon as we began to be asked to play venues a second time!

I started alone as Prepared Party (in the Cage-ian sense) in 1979, mainly using a shortwave receiver and tape edits. With bassist Mike Green, guitarist Carol Levy, and occasional organist Mike Stipe (we never called him “Michael”), we morphed into Pre-Cave. I made the tape edits, played drums or discarded parts of drum kits, and worked with radios, turntables, and my Farfisa. Sometimes synths too. Sometimes with clothes dryers filled with shoes to create more stochastic rhythms! We rehearsed in an earthen basement at the Cobb Institute in Athens, GA, and furtively in the Method Actors' upstairs space when they were away on tour. The “pre” was also a reference to PRE, the aesthetic strategy I first promulgated in ish #1 of Hot Java, a short-lived arts newspaper published in Athens in 1980.

We had a show booked at the 40 Watt Club in Athens for June 26, 1980, but for some forgotten reason it fell through. Afterwards, we again changed the name of the group to Nest (adj.). (As in, “nest” as an adjective. Mike Green and I were disgustingly deep into semiotics, textual manipulation, etc., but also inveterate wags deeply cynical about the nascent Athens music scene. Dark humor and obscure puns were characteristic elements of our interactions, and remain so to this day. Boat Of Say 'Put'!)

Nest (adj.) had its first gig at the 40 Watt in October of 1980. MSG couldn’t make it, but Carol, Stipe, my then-girlfriend Mary and I showed up with osmium chips on our shoulders. It was quite a good performance and a decent turnout. Maybe 85 people? It seemed phenomenal at the time. There was a second Nest (adj.) show on Valentine’s Day, 1981. Afterwards we took a break while Mary and I made a mess of wedlock and unsuccessfully pretended to be normal. I was recording constantly, refining the edits and inching closer to the sound I'd always heard in my head, a Stygian readymade melange informed as much by the stylistic motifs of my favorite Enjoy and Sugarhill 12" singles as Xenakis or Lee Perry - our range of influences fell noticeably outside those of our peers.

When the group returned in May, we had adopted the name Boat Of, and we remained so limned through late March 1983, when Carol was killed in a dreadful car crash.

So, attributing all the recordings on Cup of Indignation to Boat Of is a form of shorthand. I never tire of relating the tale, but I suppose it might be a bit taxing for those who aren't so interested in convoluted origin sagas.

Boat Of‘s personnel shifted slightly from Pre-Cave/Nest (adj.) - Stipe played the June 1981 gig with us, but afterwards focused his energies on M.R.E. He invited me to one of their early gigs... I was horrified by their dire farmer-rock, and our friendship ended.

David Gamble, one half of the exemplary Method Actors, quit that group in the summer of 1981 to join ours on drums and vocals. Sandra-Lee Phipps, a lovely friend of Carol‘s with a refined wit and great stage presence, cast her lot with ours on vocals. My high school pal Don Fleming also contributed (taped drum machine and library recordings) to the burgeoning collective.

We were obsessed with “field hollers” and glossolalia. David covered the latter, and Sandi the former.

Jim Walker, a friend of mine from the outback and a huge Pip Pyle / Hatfield and the North / National Health fan, sometimes joined us on drums as well. Because PiL’s original (Canadian) drummer had the same name, and since the American television actor Jimmy "Dyn-o-mite" Walker was - at least through the mid-1980s - such a recognized star, we never knew what to call our Jim. Usually we wrote something like “not the guy from Public Image and The Pack, but a really cool drummer nonetheless!”

Dominique Amet and Davey Stevenson from the excellent Limbo District (the only Athenian band with whom we really felt kinship) also joined, performing and recording radio sessions with us from late summer '82 through the winter of 1983. Dominique fell into our orbit earlier, actually - she appears on a July 1981 rehearsal recording, screaming her guts out. Such style.

When Carol was killed I became quite distraught. Things fell apart for about 15 months. After befriending Minimal Man’s Patrick Miller in California and with the encouragement of both he and Don Fleming, I got back into the game. I moved to DC, decamped with the Velvet Monkeys, and made a final clutch of Boat Of recordings that overtly presaged the shift to a new performance identity, Peach of Immortality.

Boat Of's mix of influences was quite broad, and as acutely insular snobs we were very protective of them. We never revealed much of this sort of info, knowing intuitively that one quickly becomes trapped by pronouncements of aesthetic fealty. As a collective, we were sui generis. That may seem arrogant, but it’s clear that we were doing something well outside prevailing norms. We were also hyper-critical - if we felt ourselves lapsing into any sort of lazy trope we tended to purge ourselves of the offending notions until they'd been expunged.

The archive is rather extensive - about 65 hours of material altogether. A few cassettes of backing tracks and performance edits disappeared between 1983-1984, and another was borrowed by a label guy (Peter from Armageddon / Press) who never returned it. Cunt. There was also a pretty amazing early rehearsal (September 1980-ish) tape that just vanished. But, remarkably, everything else survives.

Edited, mixed and produced March 2018 by Tom Smith, who looped and sorted the tracks via randomizing algorithms. 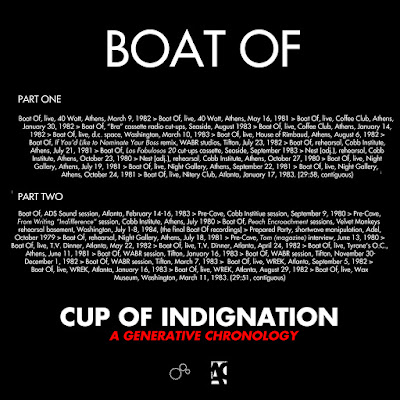