Damn... Well, anyone who knows the history of The Pink Floyd understands that they didn't always suck, that they once evidenced a tenuous sort of greatness, and that Richard Wright was a fine keyboardist. Sad that you're gone, sir. 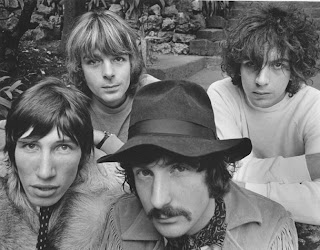 (Rick's sitting with his hands on later nemesis Roger Waters' back, to the right (your left) of Syd Barrett. To the left (your right) of Waters is Nick Mason, who produced Robert Wyatt's stunning second solo album Rock Bottom, and The Damned's too-frequently maligned sophomore LP Music for Pleasure after the group couldn't get hold of the long-incapacitated Syd...)

After 1971 or thereabouts, all bets are of course off, but prior to bloat and ignomy...

The John Peel tribute blog Perfumed Garden has the Floyd's August 11, 1968 BBC session posted here. (And features David Glimour, Mr. Barrett's de facto replacement, on guitar.) To my ears, this is what they were all about. The Syd years constitute a separate and wholly other paradigm, infinite magnitudes betwixt and beyond the turgid dross of Dark Side of the Moon, Animals, The Wall, et al.