The stragglers have awakened! Aussie sound demon Toecutter is completing his submission, and longtime Shavian comrade Newton will soon be fixing hellish hot rails to his mix. Three discs of madness, on their way to you, the faithful. I've updated the poster... 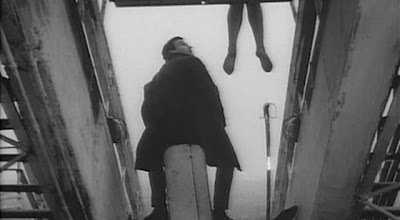 (Jan Nowicki, on the always-smouldering suitcase, and the legs of Joanna Szczerbic, in Jerzy Skolimowski's near-perfect Bariera.)

Sleep intervened, but not from disenchantment - we'd already spent over an hour with Monday's Daily Show and the final (season three) episode of Mad Men, and as working stiffs, stamina extends only so far. Will lose myself in the remainder of Bariera later in the afternoon...