If Surrealismus arrived any sooner, it'd be on every worthwhile reviewer's "Best of 2017" list, not that I believe Tom Smith cares about those damned things... I only mention it b/c this monstrosity, in the works for longer than Facebook has existed, is an unquestionably MAJOR thing and you do need to hear it. 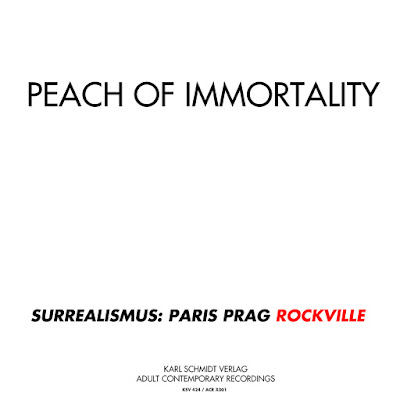 It's not even Tom's best work... after 1992, his music grew exponentially in depth/complexity/etc and continues to do so... "best" is a tough distinction to make in the face of ongoing best-ness. However: the music compiled here literally changed my life. If I didn't run into this tanned weirdo making tape loops in Rat Bastard's Miami Beach studio when I was a high school goofball just beginning to ignorantly bang cassettes together, I would not be ignorantly banging cassettes together today.

So what is this? It's a 9xCDR (!!!) set collecting music both released and (more frequently) not by Tom Smith's 80's/90's band Peach of Immortality. Some of it sounds, to 2017/18 ears, a lot like the genres that Smith has since broken free of: noise, improvisation, 'industrial' etc... but the singular blood & passion is audible. Listen to the glorped tape fog in The Baptist Hymnal, REM = Air Supply, Talking Heads '77, or that remarkable 1986 live recording from TT the Bear's Place and tell me that, if you encountered any of it unprepared at 16 years old, your face would not also have melted clean off.

I've told the story before, but it's worth repeating: after uncomprehendingly watching/hearing Tom record some loops taken off a Misfits bootleg in Rat's studio one school-night evening in 1990 or 1991, I asked him what exactly he was doing... his pithy reply: "I'm trying to make a tape deck ROCK". And that, friends, is why I make music now. Buy this album, then listen to the rest of Tom Smith's work to find out what it was merely a prelude to.

I was gobsmacked when I found mother's secret stash of photos from her teens and early 20s - her allure was obvious. This image was particularly astounding, as she'd always been quite tight-lipped about life before my father. I imagine Eunice as a real heartbreaker, part man-crazed party doll, part calculating social mover, and thoroughly independent. All positive attributes! Today would have been her 95th birthday. 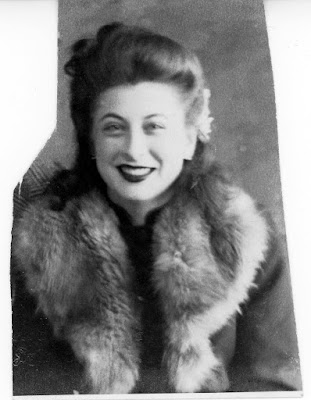 She had long since ripped at least one budding squire out of her life, but who could it have been? (I have suspicions - her high school graduation Autographs book is stuffed with variations on "Roses are red, violets are blue...") She was the queen of tiny Warwick, Georgia, but attended high school in the neighboring town of Sylvester, which must have seemed like Kuala Lumpur by comparison. Here, in 1940, she's radiant, 19, ready to take on all comers. Then, of course, she met my grease monkey father five or six years later and all bets were off - it was love at first sight for both. Thanks for everything, Mom. You were a handful.
at December 29, 2017 No comments: Links to this post

Promo alert: One last release for '017 from Karl Schmidt Verlag. Namely, Praha Olomouc Ostrava Bratislava: November 2016 by Smith Pelikán Klamm. This was one of the best tours of my life, raucous and deeply rewarding. The audience in Prague were well-versed, attentive, in the know. The attendees and captive prisoners at the rough-and-tumble bar in Olomouc forcefully voiced their opposition but were won over - or worn down - by our savoir faire. (Or maybe just drunk enough to let loose.) The industrial-goth event in Ostrava was a poor fit for us but we soldiered through with a tight set and choice bot mots. (At least Patrik and Jan were snickering.) We smoked at the Next Fest in Bratislava (one of my favorite cities on the planet); the organizers approached me at the end of the night, discussed the pros and cons of the various performances, and then said "but YOUR set, you guys, that was EXTREMELY experimental!" I had to laugh. All we did was walk out and do our thing. My most outré move? I spoke to the audience, looked them in the eye. A bridge too far for most, I suppose. Anyhow, it's all there, save for line hum and the like. Two recordable CDs, for your (dis)pleasure. 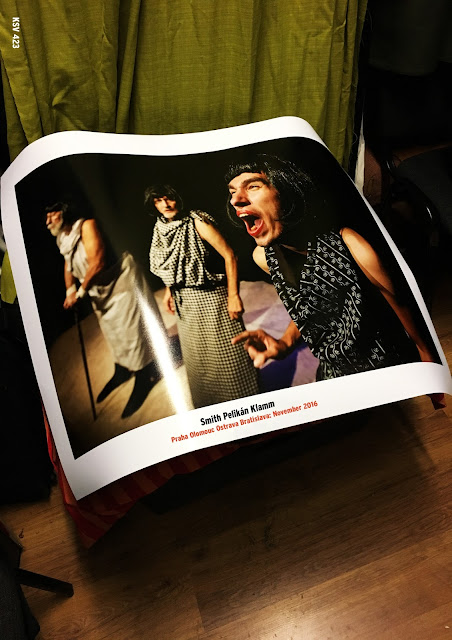