I saw Cecil Taylor perform only once, at the Baird Auditorium of the Museum of Natural History in Washington, DC, on November 30, 1984. It was an astonishing experience. Two-thirds of the audience - well-heeled District toffs doing their cultural duty - fled halfway through his uncompromising set. He was 51 at the time. 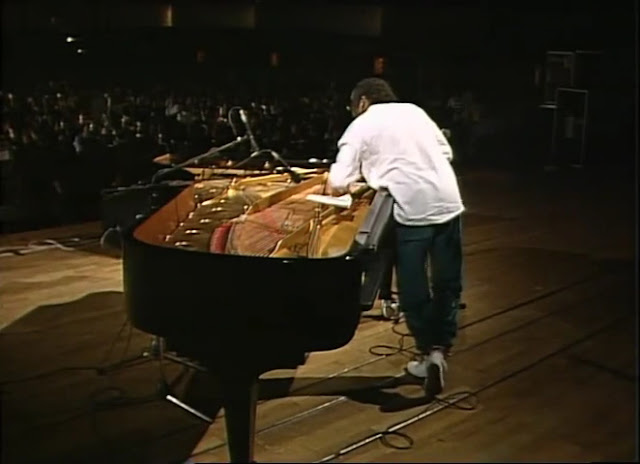 (Taylor, performing in Nürmburg on July 7, 1984, nearly five months before the concert I attended. It was filmed by Bayerische Rundfunk and broadcast over Germany's Das Erste.)

Today he died, having turned 89 less than two weeks ago.

Here's the Post's preview interview with Mr. Taylor, printed in its entirety.

In case you'd rather read it from its source, here's a link.

"Entertaining? Well I hope it is entertaining, but it is also I think the most holy thing I can do," the 5l-year-old pianist says of his music. He was resting after a performance -- he called it exhilarating -- with his seven-member Unit here last week.

Taylor, who performs solo this Friday at Washington's Baird Auditorium in the Museum of Natural History, was lounging on pillows on the otherwise bare floor of his Brooklyn brownstone, wearing a sweat suit. He speaks carefully. His art, after all, has been called such things as "avant garde," "violently energetic," "technically and intellectually virtuosic" for the past 25 years, and he believes such characterizations are misunderstandings.

"With the artists that were most important to my own development, you felt and then learned what made you feel, but you felt first," he says. "It seems to me there is a wonderful balance between how one consciously organizes material, which is determined by how you train your senses to respond to something -- in other words, intellectual manipulation -- and what makes you feel good, which is passion."

Most listeners are awed upon their first encounter with Taylor's music, then puzzled. They can't discount his passion -- he's obviously a lion on the ivories, as his hands pounce with incredible speed and strength, or stroke the keys with sensitivity. Yet Taylor is an improviser using a vocabulary of his own device, related to the traditions of jazz, blues, rhythm and blues, African ritual and European classicism.

There are blue notes and modulations, but they are obscured by the flurries of his percussive fingers, fists or forearms. There are few single note lines, the standard tools of melodic variation in jazz, but rather a plethora of brief motifs that Taylor arranges and rearranges with unpredictable intent. If he's performing with his Unit -- alto saxist Jimmy Lyons has been with the pianist 24 years, but other players come and go -- everyone's likely to be blowing at highest volume at once; alone, Taylor is more reflective, given to sustaining harmonic tension for half an hour or more, then resolving his suspensions with a sumptuous cluster. His sound is seldom simply swinging or tuneful, though a firm pulse and expansive themes are always there, somewhere.

"They call it collective improvisation, they call it jazz, but I don't know if jazz is a noun, an adjective or a political science term," Taylor says. A newborn kitten mews and romps on the floor around him. Books on Coptic civilization and modern architecture are propped open on his mantel. "Inherent in that word jazz is a tie-up with the particular socio-economic-historical situation of Americans of African and native American descent, but there's nothing in the word which gives very much insight into the spiritual-religious musical process that makes it."

Taylor refers to many of his contemporaries as either musical "revisionists" or, like "Mr. Miles Davis," indulging in "a compromise mish-mash of musical stands." Taylor has a somewhat kinder opinion of Ornette Coleman, arguably his only other peer as an innovator in improvised music. "The thing I like about Ornette is the uniqueness of his syntactical structure when he's speaking," the pianist allows.

This is not to suggest Taylor disdains all others, but that he has a purist's discriminating taste. He speaks glowingly of "the glories I learned from Marvin Gaye's marvelous Fender bass player," and regards Lena Horne, whose one-woman show he saw half a dozen times, as a great singer, dancer and comedian. A balletomane who has collaborated with choreographers Alvin Ailey and Diane McIntyre, Taylor shrugs at the reputation of Mikhail Baryshnikov, for whom he composed "Eatin' Rain in Space."

Of working with Baryshnikov and Heather Watts, he says, "I drove them crazy, actually. But it was a wonderful experience in terms of my realizing what it means to me to walk on stage. I learned something from it -- that you don't simply walk to the piano."

Taylor probably never just walked to the piano, though his approach may have been more conventional in his youth than it is today, or was this past summer, for instance, at Carnegie Hall. Sharing a Kool Jazz Festival bill with the more traditional jazz pianist Oscar Peterson, Taylor leapt out from the wings with a series of throaty cries and highly stylized, frozen gestures. At first his playing seemed tentative, but soon he was like a master weaver working a complicated loom. At this point, some members of the audience grew restless and rudely fled their seats. A faction of Taylor's fans responded by vocally cheering their hero's more energetic passages -- becoming equally rude to anyone who wanted to hear the pianist's nuances. Taylor's playing rewards close attention; volume is not his point.

"Energy is a term that's been misapplied to my music," he says. "That's not what's happening here. It's more than physical; my playing is like using all the aspects of one's mind and passion through reading, through qualitative walking in space, through seeing experience, through making one's senses be the most exact barometer of one's cultural environment. So I dance, I sing, I write poems, I have these books here, because it means something. That's what I'm putting into this music; this is also what I bring to people I'm close to. This is the simplest version of a spiritual transformation which has to do with the state of trance."

Taylor's concern with theory is not an eccentricity. It is, rather, the result of a rigorous musical education from the New York College of Music and the New England Conservatory, as well as study of such jazz artists as Duke Ellington, Dave Brubeck and Fats Waller.

"Ellington makes quite clear that you construct a sound universe that allows individual musicians to enrich the framework that they agree to participate in," he says, explaining his Unit's practice of collective improvisation. In the 1950s, after Taylor had accompanied such mainstream players as Hot Lips Page and Johnny Hodges, he became impressed with "the depth and texture of Brubeck's harmony, which had more notes in it than anyone else's that I had ever heard." His debt to Waller and other Harlem stride pianists is two-fold: most obvious is Taylor's insistent playing in the piano's bass register, and his determination to have fun.

One might not hear that in his music at first -- Taylor's passion is usually interpreted as sober, perhaps born of frustration or outright anger. He first recorded his own music in the late '50s; in the '60s he became a leader of the jazz avant garde, which often wed its radical esthetic to a radical political philosophy. In recognition of his achievements, Taylor has been awarded such establishment honors as a Guggenheim fellowship, election to the down beat magazine jazz hall of fame, and performance at the White House during Jimmy Carter's Bicentennial jazz party. But unlike Ellington, Brubeck and Waller, he's had limited commercial success.

"To play this music is in itself a cultural statement that transcends the immediacy of a political statement," Taylor says. "Plus, you never make any money." He adds, "The only people who are free are those who don't have to worry about where their next money is coming from.

"Legend has it I'm a morose person, but actually I don't care what people think, because I'm happy much of the time, doing what I want to do. One of the things you discover as you grow older is that no one else takes the responsibility for you wanting to do what you want to do."